SHE LEADS PODCAST S4 E7: Lift As You Climb with Tonya Burke 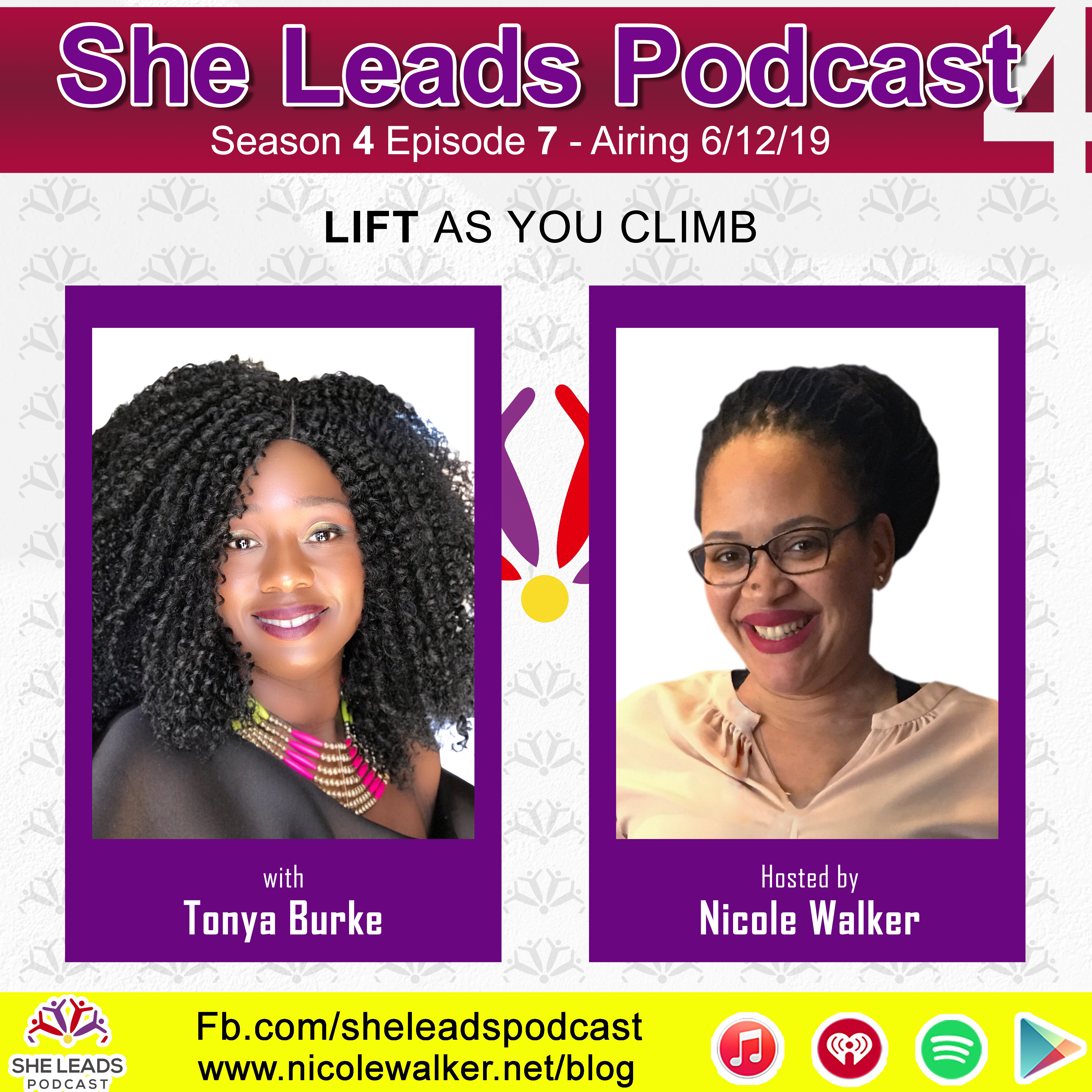 Welcome to She Leads Podcast Season 4, Episode 7! This episode of She Leads Podcast features Tonya Burke founder of Hidden Gems Enterprise.  Tonya Burke is an Author, Podcast Host, and Political Strategist who leads her life like the Boss she is. To hear Tonya Burke’s take on leadership, listen to her interview as she discusses the importance of mentors, networking, and resting.

Tonya Burke is a sought-after expert, speaker, coach, strategist, and author of On The Edge of Greatness: A Real Conversation on How Black Women Can Take Over By Powerfully Running For Office; Co-Author of God Doesn’t Want You To Be Broke; host of the highly anticipated podcast Hey Colored Girls You Tha S.H.I.T. (Sisterhood of Highly Innovative Trailblazers); An award-winning politician and community leader that has been advocating as early as elementary school.

Most commonly known as The Political Badass TM, as she Educates, Empowers, and Engages women to run for political office; seek leadership positions in the public and private sectors; and help the leaders of leaders use their inner super hero powers, gifts and purpose; making their mark in the world; all while still loving the life that they live, enjoying their families, and keeping their sanity in the process. Tonya is the Founder and CEO of Hidden Gems Enterprise (www.tonyaburke.org), a boutique leadership coaching, political consulting and strategy firm.

She has been featured in The Atlantic, Black Voice News, Press Enterprise, Precinct Reporter, Noteworthy and Blavity. She has appeared as a panel expert with former Secretary of State and Senator Hillary Clinton and Congresswoman Maxine Waters, a commentator on Canadian Television (CTV), a special guest on Message to The Masses with Tesa, and Charter Local Edition.

I really enjoyed this interview with Tonya and I hope you did as well!

I agree with Tonya’s viewpoint on the importance of not being an egotistical leader, as we need to understand that we are leading for ourselves as well as others. According to Tonya, we need to realize and be grounded in the fact that it’s not all about us, and work toward the greater good for those around us. Successful leaders do not only uplift themselves, they also uplift and push other people. In an effort to not be a “resource hogger” as Tonya stated, we should aim to create a platform for others to elevate themselves also. A quote by Jack Welch reads, “Before you are a leader, success is all about growing yourself. When you become a leader, success is all about growing others”.

I admire Tonya’s ability to bounce back from her public failure and use the lessons she learned to show up better and stronger. Tonya could have easily chose to retreat and let this experience defeat and deflate her, but she did not.  For Tonya, this failure was the best thing that happened to her, because it woke her up. As a result she was able to learn about herself, dig deeper within herself, and love herself more. Sounds like a win in my book! As Tonya mentioned, negative situations can yield positive results, if we do not allow our experiences to go in vain. This reminds me of the Season 4 Episode 1 interview with Chinyere Sam entitled “Experiences Make You Stronger”, as they most definitely do.

I can relate to Tonya’s belief that women do not often realize their leadership skills and are not always recognized for them, as I believe the same. Through the ages we have been leading in our households, churches, and the school systems; yet, we do not always recognize or get credit for our leadership contributions. Tonya did not seeing her leadership abilities when her father did, and similarly, I did not see my leadership abilities growing up yet my Great-Grandmother and Grandfather did. Only after stepping up and putting herself out there to run or public office did Tonya see herself as a leader. Likewise, I did not see myself as a leader until I began creating She Leads Podcast and Nicole Walker Network. I love when everything falls together and we find ourselves exactly where we are supposed to be, even if we did not initially have the mindset or vision.

Nicole Walker’s Takeaway of the Week

Tonya mentioned the necessity of resting our bodies and souls in an effort to be the best leader we can be. As Tonya mentioned, if we are not good personally we cannot show up the way we may want for others. We have to be mindful not to wear ourselves down and take proper care of ourselves, if we want to lead effectively.

I will make it my business to practice self-care more often and ensure proper rest and rejuvenation as a part of my regimen. Considering that I aim to help others be better and do better, it is imperative that I am whole before I can give myself fully to this cause.

A quote by Ovid reads, “Take a rest; a field that has rested gives a beautiful crop”.

My leadership challenge for you would be to think about the one thing you can take away from this episode and adopt into your life.  I know it’s hard to absorb too much information at one time and it’s even harder to try and implement too many changes at once.  When I attend a training or listen to podcasts I aim to walk away with a least one thing that stuck out to me and one way that I can change as a result.  I challenge you to do the same!  If you decide to take me up on my challenge I would love to know about your key take way.  If you care to share please go to the She Leads Podcast Discussion Group on FB and leave your comment under the Takeaway Thursday post for Season 4 Episode 7.

Thanks and until next time “Be Empowered and Empower

Category: BlogBy Nicole WalkerJune 12, 2019
Tags: Female EntrepreneursFemale LeadersLeadershipSeat at the TableShe Leads PodcastWomen EmpowermentWomen of Color
Share this post
Share with FacebookShare with TwitterShare with Google+Share with PinterestShare with LinkedInShare with WhatsApp